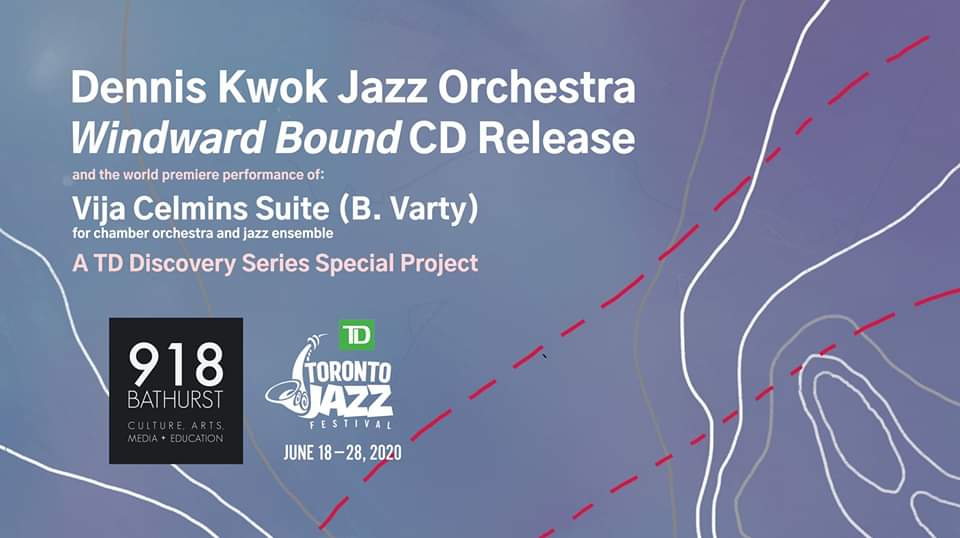 Join the Dennis Kwok Jazz Orchestra in celebrating the release of their debut album, “Windward Bound”, as well as the world premiere performance of the “Vija Celmins Suite” for chamber orchestra and jazz ensemble by Toronto-based saxophonist and composer Brenden Varty.

The Dennis Kwok Jazz Orchestra (DKJO) is a Toronto-based contemporary big band committed to the creation, performance, and showcase of new works composed by the next generation of artists. The group is led by and comprises of 19 of the finest performers, composers and arrangers under 35 in Southern Ontario. Formed in early 2017, DKJO has since developed a repertoire of over 20 original works from within the band and has performed in many of Toronto’s iconic venues including Lula Lounge, Gallery 345 and Burdock. They have also made appearances at the Toronto Undergraduate Jazz Festival as well as had collaborations with JUNO award winners, Allison Au, and Alex Dean.
www.denniskwok.ca

The evening will be opened by the world premiere performance of a new original work for chamber orchestra and jazz rhythm by Toronto-based saxophonist and composer Brenden Varty.

Brenden Varty is a Toronto-based multi-instrumentalist and composer originally from Oshawa, Ontario. He graduated from Humber College with a Bachelor of Music (Honours) in 2016 and is currently in the Master of Music Performance program at the University of Toronto. His arrangements and compositions, drawing heavily from both Western art music as well as jazz, have been performed publicly at such venues as the Canadian Opera Centre, The Rex, The Burdock, Lula Lounge, and Humber College.

Brenden has released an EP including his original compositions and arrangements entitled Cloudstream, and is currently working on a second EP of his compositions. In addition to these, he can be found on numerous releases headed by his peers that span genres from jazz to funk to spiritual.