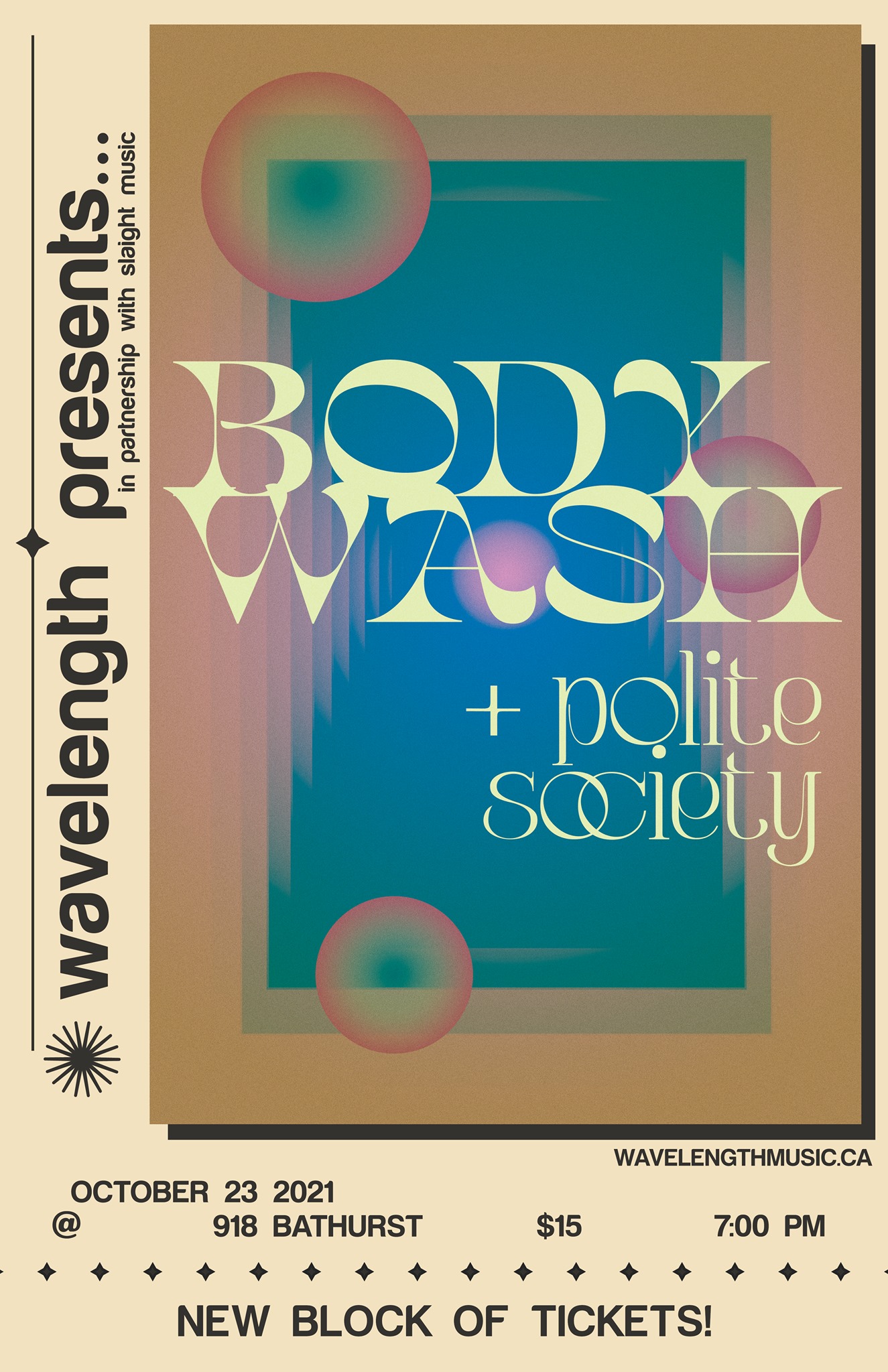 “Welcome Back, Shows!”
Wavelength Monthly Music Series – October 2021
In partnership with Slaight Music
Featuring:
Bodywash (Montreal)
Polite Society (fka Hollow Earth)
Projections by General Chaos Visuals
Decor by Roxanne Ignatius
Art by Stephanie Avery
—-
Saturday October 23, 2021
@ 918 Bathurst Centre for Culture, Arts, Media & Education
918 Bathurst St., Toronto
Doors 7pm, over by 11pm
$15 advance at ShowClix.com
Ticket Link: https://bit.ly/WLbodywash
All Ages / Licensed
SEATED SHOW!
—-
COVID Protocols:
Your safety is our primary concern. We will have a maximum of 80 tickets on sale. Seating will be accommodated at separate tables. Audience members aged two and older are required to always wear face coverings while on 918 Bathurst property, except when actively eating and drinking in their seats. Proof of full vaccination minimum 2 weeks prior to event is required to enter.
Accessibility: 918 Bathurst is not currently wheelchair accessible due to stairs (two half-flights to enter the performance space, and one flight to access the washrooms). For all other accessibility requests, please contact us at info@wavelengthmusic.ca
—-
“Welcome Back, Shows!” – Wavelength’s first monthly concert of fall 2021 marks our series’ return to in-person, indoor shows. The first of two intimate, seated concerts at the gorgeous, reverberant 918 Bathurst Centre will also see the series return to the sounds of its early years, with a lineup spanning genres like shoegaze, psych-rock and dream-pop.
Fresh off an appearance at this fall’s POP Montreal festival, Montreal neo-shoegaze duo Bodywash return to Toronto for their first in-person show since the pandemic shut down all live performances, just a few months after the release of their critically acclaimed debut album, 2019’s Comforter. Like fellow Montrealers Braids, who contributed mixing-board wisdom to Comforter, Bodywash bring a fresh 21st century perspective to the edgy ambience of the 1990s.
With a lineup including some Toronto indie/psych scene veterans, Polite Society also make their return to the stage for the band’s first concert since the release of their self-titled debut album, on vinyl via UK label Spiral Void.
And a Wavelength show wouldn’t be the same without the trippy visuals of the series’ long-time in-house projection artist, General Chaos Visuals, whose colourful visuals will fill the former Buddhist temple that houses the 918 Bathurst Centre.
—-
About the artists:
Bodywash was formed in 2014 when Chris Steward and Rosie Long Decter began jamming in a basement rehearsal room at McGill University in Montreal. Bonding over a shared affection for shoegaze and dream-pop, the two found an immediate chemistry. When it came time to make a full-length album, Bodywash enlisted Nigel Ward to record the LP. The album Comforter was mixed by Taylor Smith and Austin Tufts of the band Braids, and was mastered by Evan Tighe. The result is the perfect insomniac’s record, a late-night album of emotional extremes, from the enveloping warmth of shoegaze to the stark electronics of ‘90s trip-hop and IDM. Guitars blur in and out, melodies vanish and appear, synths blinking like lights in a fog. It’s an album of obsessive detail buried in a blur of reverb. It draws you in and pushes you away in equal measure.
Polite Society is a Canadian foursome comprised of psych and avant-rock devotees whose collaborations likely yield the expected and unexpected (but always polite) results. Their name is purely coincidental to the present utopian state of the world.
—
Poster design by Juliana Carlevaris
+ Google Calendar+ iCal Export